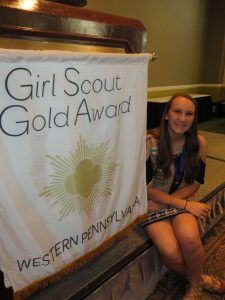 Girl Scouting’s highest awards – the Bronze, Silver, and Gold Awards – are a girl’s chance to make a lasting difference in the world.

This award, presented to Sam by Girl Scouts Western Pennsylvania, recognizes girls in grades 9 through 12 who demonstrate extraordinary leadership through sustainable and measurable Take Action projects that address needs of a community.

Samantha’s Gold Award project was aimed to assist middle school aged band students in the improvement of their playing ability through a partnership between middle schoolers and high school band students. Samantha recruited volunteers from the high school marching band and wind ensemble to work with students at Evans City Middle School during afterschool sectionals. Approximately 23 members of the sixth grade band participated. These sectionals were held for one-hour after school each week for five weeks in the fall of 2016. The high school volunteers helped prepare students to perform holiday music in small ensembles for the school’s annual “Deck the Halls with Music” event at Evans City Middle School, in which middle school band students perform in the hallways, collecting donations for the local food banks from students, faculty and staff as they arrive at school. The high school students served as role models for the younger band students, allowing them the opportunity to see and hear what they will be able to do if they continue to practice and continue with their music education. The high school students were also able to reflect on their own experiences in order to help the younger students improve. Overall, the project was a great success for all students involved. Everyone involved with Samantha’s Gold Award project learned from this experience.

The Gold Award is a national award, with national standards, and it represents a Girl Scout’s time, leadership, creativity and effort contributed to making her community a better place.