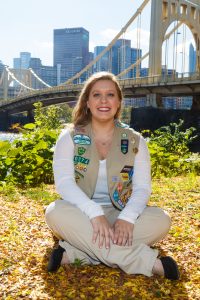 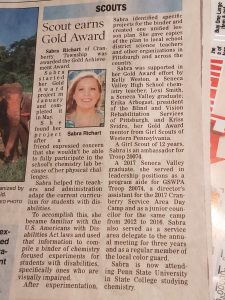 Girl Scouting’s highest awards—the Bronze, Silver, and Gold Awards—are a girl’s chance to make a lasting difference in the world.

Sabra graduated this year from Seneca Valley School District and served in a leadership position as a Program Aide for GSWPA Troop 20074, a Directors Assistant for the Cranberry Service Area Day Camp in 2017 and as a Junior Councilor for the same Day Camp from 2012-2016. Sabra has also served as a Service Area Delegate to the annual meeting for three years and as a regular member of the local Color Guard. As a Girl Scout member for 12 years, Miss Richart is a Girl Scout Ambassador of Troop 20074. She was supported in her Gold Award effort by Mrs. Kelly Weston Seneca Valley SHS Chemistry teacher, Miss Lexi Smith Seneca Valley Graduate, and Mrs. Erika Arbogast President of Blind and Vision Rehabilitation Services of Pittsburgh and by Ms. Kriss Svidro Gold Award Mentor from GSWPA. Her Gold Award project began in January 2017 and was completed in May of the same year.

After a friend expressed concern that she wouldn’t be able to fully participate in the school’s Chemistry lab because of her physical challenges, Miss Richart decided to aid the teachers and administration adapt the current curriculum for students such as her friend. To accomplish this, she became familiar with the United States ADA laws and used that information to compile a binder of chemistry focused experiments that are educational, adaptable, and fun for students with disabilities, specifically ones who are visually impaired.

She researched and tested experiments that produce a reaction that can be perceived by senses other than sight such as touch, sound and smell. After testing a variety of experiments in the lab with students, Sabra identified specific projects to be included in the binder. She then put these experiments together into one unified lesson plan that she delivered copies of to local school district science teachers and other organizations in Pittsburgh as well as across the country. These binders will make her project available for future chemistry students not only in the Greater Pittsburgh region, but also nationwide.

The Gold Award is a national award, with national standards, and it represents a Girl Scout’s time, leadership, creativity and effort contributed to making her community better.

About Girl Scouts: Founded in 1912, Girl Scouts of the USA is the preeminent leadership experience for girls and is the leading authority on girls’ healthy development. Girl Scouts builds girls of courage, confidence and character, who make the world a better place. The 3-million-member organization serves girls from every corner of the United States and its territories. Girl Scouts of the USA also serves American girls and their classmates attending American or international schools overseas in 90 countries. For more information on how to join, volunteer, reconnect or donate to Girl Scouts Western Pennsylvania, call 800-248-3355 or visitgswpa.org.