Cranberry Area Girl Scouts of all ages used a day off of school to work together creating nearly 125 blankets for cancer patients in honor of their founder, Juliette Gordon Low.  Juliette Gordon Low died in 1927 of breast cancer,  a time in our history when cancer wasn’t openly discussed.  This project was selected as the Cranberry Neighborhood Service Unit Project of the Year for 2016 and follows several other scouting year projects designed to help the local community while encouraging scouts of all ages to work together for a common goal.
Today, girls are painfully aware that cancer is a struggle for many and they do not want to sit on the sidelines but instead want to do something to encourage others.  In fact, many Girl Scout families in Cranberry have been affected by cancer in some way and several local girls wanted a way to help.  Scouts from Troops 20519 and 20074, Samantha Mill, Andi Mikula, Sabra Richart and Alena Richart, all had grandmothers who were diagnosed with cancer over the past year and they put their diverse skills together to help coordinate the blanket making program.  Samantha was made aware of a need for blankets at a local cancer center while her grandmother was undergoing treatment recently for uterine cancer.  She learned that these centers routinely run out of blankets. Andi, Sabra and Alena learned that there was a great deal of misinformation still in the community about cancer prevention and treatment. The girls each worked with their leaders and the Cranberry Girl Scout Service Unit to plan the day by making SWAPs and posters, researching cancer, collecting supplies and organizing the activities.  Other troop leaders joined the efforts and recruited moms, who were cancer survivors, to set up drop off locations for supplies and help to publicize the event.
More than 70 scouts from 16 different troops, ranging in age from 5 – 17, and leaders, worked together tirelessly on Friday, November 11, 2016 and at home, preparing fleece and tying knots making no sew blankets which will be donated to local cancer patients undergoing treatments at a variety of locations in the Pittsburgh Area. Locations include Children’s Hospital, St. Margaret’s Hospital Cancer Unit where Samantha’s grandmother received treatment and the Cancer Center at AGH Wellness Pavilion in Wexford where Andi’s grandmother received treatment.  Patients, along with Samantha’s grandmother, have already received the blankets with much appreciation.
Photos courtesy of Tabatha Mill and Tatiana Brower 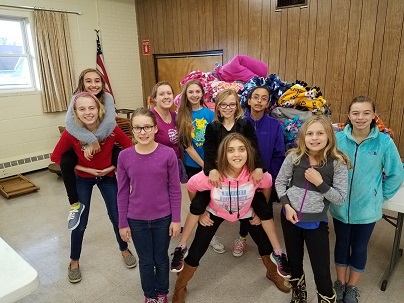